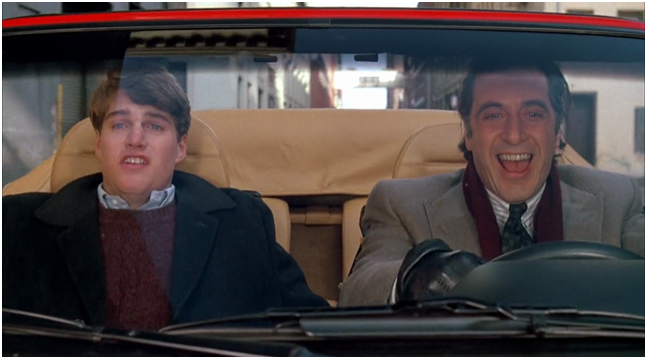 This is the diastole and systole of mainstream storytelling.

Now, the difficult part is not to create the obstacle, but to make the protagonist overcome it. Actually, it’s not just this. It’s to make him or her get away with an unexpected twist, with a move that’s so original and clever the audience says, “Wow!” — because it’s been, like I said, a somersault.

I’ve noticed that quite often screenwriters accomplish this task by using a particular formula. They rely on a recurrent pattern of action: lie and raise the stakes — lie and brag.

The lie is what concretely creates the way out. The brag is what’s funny, what makes the twist entertaining, a supplement of surprise.

Scent of a Woman (written by Bo Goldman)

New York City. Young Charlie (Chris O’Donnell) lets blind Colonel Slade (Al Pacino) drive a Ferrari. Charlie thinks that test-driving a car will help Slade’s depression. But Slade talks his way into staying behind the wheel, and he starts driving fast. Too fast. Guided only by directions that Charlie, terrified, gives him from the passenger seat. Suddenly: police sirens. Slade has to pull over. The two are in a corner.

Slade pretends he’s not blind and is actually Charlie’s father — a father who couldn’t deny his son’s desire to see what a Ferrari can do. All this is a defensive move. You expect that Slade, having softened up the cop, would quietly accept the warning and go away. Which of course Charlie expects too, but…nope.

Slade, discovering during the course of their exchange that the cop wasn’t in the Army but was instead in the less heroic Coast Guard, promptly starts making fun of him, displaying a bravery we find really amusing.

L.A. Night. Max (Jamie Fox), a taxi driver — “the talker” — and his passenger Vince (Tom Cruise), a killer — “the doer” — have pulled into an alley beside the apartment of Vince’s next victim. Vince wants the reluctant Max to drive him the entire night, from one victim to the next, so he handcuffs Max to the wheel. Max has to wait right there until Vince returns from the killing. The cab, however, was damaged during a previous assassination. And the police, without knowing what happened, informed the cab company owner that one of his cars should be withdrawn and repaired. That’s why the annoyed voice of the boss now crackles unexpectedly from the cab radio. He’s angry. He wants his car back. He tells Max he’ll  have to pay for the damages. All this without knowing, of course, that there’s a killer in the back seat and a dead body in the trunk. The killer’s plan appears ruined. The driver’s life is now in extreme peril, because Vince will certainly shoot Max before abandoning the car. Thus, here the two are in a corner.

Vince picks up the receiver and makes marvellous use of a lie. He pretends to be an attorney, and accuses the cab owner of trying to extort Max: it is a fact that collision policy and general liability insurance will cover the damages.

Vince then forces the timid Max to end the conversation with his boss by insulting him over the radio — something that Max in other circumstances would never conceive possible, even in his most hidden fantasies. We laugh. We would like to be as smart.