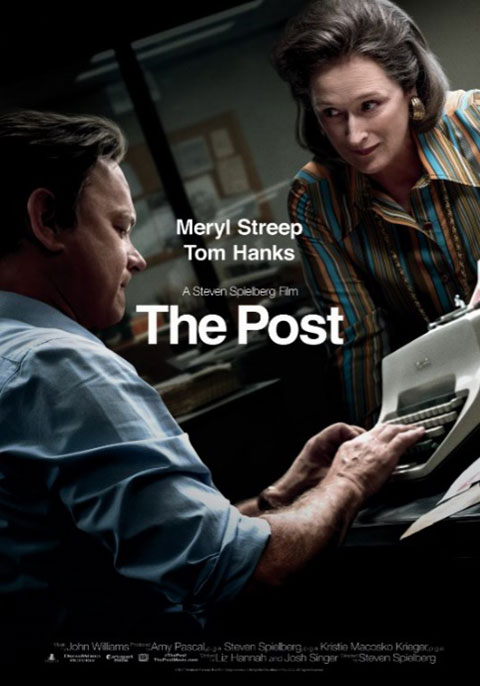 From spec to shooting script, from first draft to movie…a long journey. Metaphor aside, and in concrete terms of screenwriting, the distance consists of many drafts and many changes to the story. To improve it.

I just happened to read the first draft of The Post script, penned by Liz Hannah before her screenwriting partner Josh Singer came on board. Steven Spielberg offered his notes, while Tom Hanks and Meryl Streep contributed too with their suggestions.

Here are some of the differences I have noticed (spoilers ahead).

In the script, Bradlee (Hanks) doesn’t change much throughout the story. In the movie, however, he must realize and admit, like Kay (Streep), that a politician he’s familiar with (JFK) took advantage of this relationship by lying.

If you have two protagonists, it’s better if they both have significant inner arcs.

In the script, Kay’s sense of insecurity in a world dominated by men is frequently mentioned but remains unseen. At the beginning of the film, we see her in The Washington Post boardroom unable to give the statement she has prepared.

In the spec script, the conflictual nature of the two protagonists’ relationship hangs on more or less superficial reasons. Bradlee doesn’t trust Kay’s ability to do her job as a publisher. In the movie, the story puts them in conflict over a more interesting point: how politicians (in this case McNamara) can become too chummy with the press and influence it.

Go deep, whenever you can.

The spec lacks a prologue. In the screenplay, the story doesn’t begin, as the movie does, by recounting the origin of the Pentagon Papers: Ellsberg, the leak, visiting the battlefield in Vietnam, witnessing the costs of the war, updating McNamara and, one minute later, hearing him lie about what was just told to him. In the script, we start directly on Kay and Bradlee at a restaurant table. The change is useful: the Pentagon Papers are not an easy topic, the issue needs an explanation, the historical context needs a recall. Moreover, the prologue vividly shows the audience what is at stake: human lives.

In the first act of the script, we don’t follow the trajectory of “the bomb,” i.e., the Papers transformed into news by the New York Times. We don’t see the action of a young runner sent by Bradlee to spy on what their rivals are preparing. In the movie, the addition is efficacious: first, it heightens curiosity; second, by sending the runner, Bradlee appears active — he does something: he proves his skills and experience, his knowledge of the job and of its unofficial practices.

In the spec, Kay makes one great choice: let’s publish about the papers! In the movie, the choice is doubled: first she gives the green light, then she has time to think about it and possibly change her mind (which she won’t do). Since choices feed drama, having two of them is obviously better.

And between these two choices…

In the movie, when Bagdikian, the Post journalist, meets Ellsberg, the leaker, the risk of going to prison for publishing the Papers is clearly stated. This risk will be overtly emphasized again later in the movie, also in relation to Kay and Bradlee. But this never happens in the script.

Which is also true regarding values. In fact…

The freedom of the press — free journalism as a protection from tyranny — is more heavily underlined in the movie, where it is openly espoused by Bradlee. Moreover, only in the movie are we allowed to see how many newspapers support and follow the battle being waged by The New York Times and The Washington Post.

The last (but certainly not least consequential) difference between the spec and the movie: the first draft lacks a villain. It was Spielberg who asked the screenwriters to add one. (Listen here to 3rd & Fairfax: The WGAW Podcast episode 92). In the first draft, in fact, Nixon is just mentioned here and there. While in the movie, instead, we see him and listen to his angry telephone calls. We witness his vengeful intentions. But his presence doesn’t merely enhance conflict: it also sets up the movie’s final scene, when The Post pays homage to All the President’s Men with a reference to Watergate.

If you are interested in the first draft and would like a detailed review of it, read this post, which the always clear-headed Carson Reeves wrote last year, months before the movie came out.