The competence factor in interrogation scenes 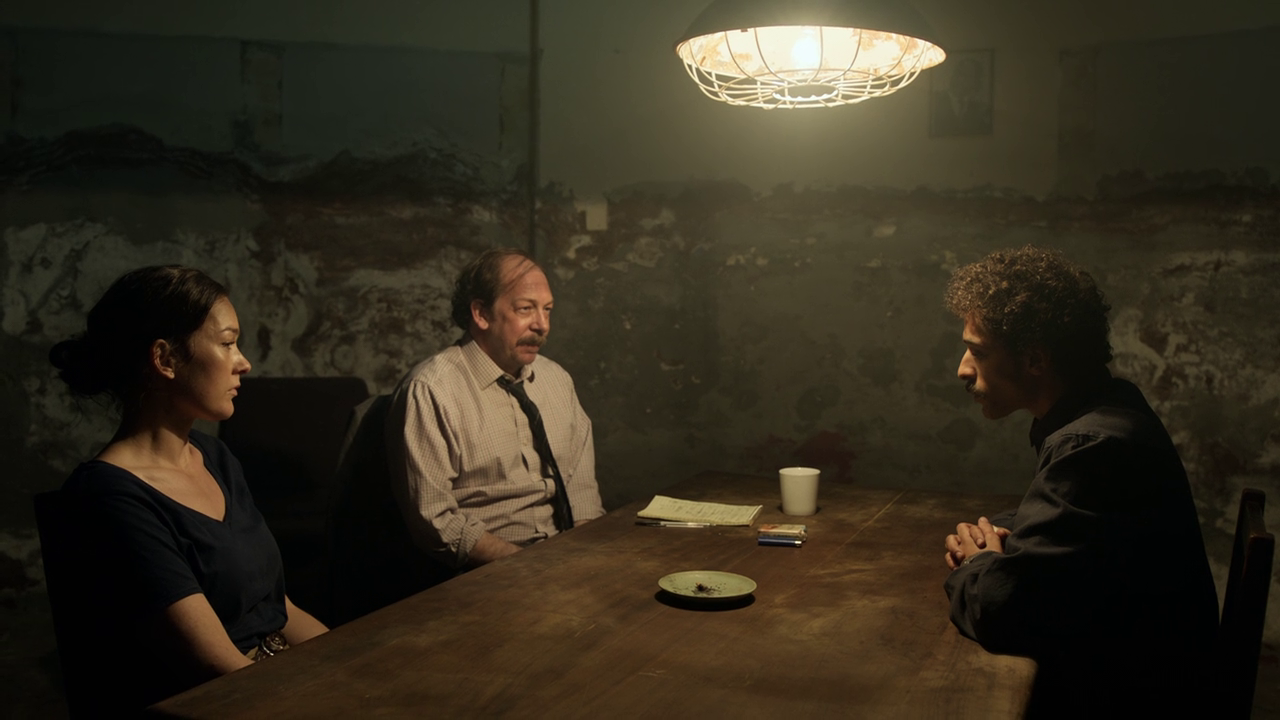 A well written interrogation scene is a demonstration of competence by the interrogator. Competence – i.e. a method, the development of a previously prepared strategy, the progressive discovery of the plan followed by the detective during the conversation – is an ingredient the audience expects to find in this kind of exchanges. Viewers like to witness how an experienced pro uses what he has learned in a lifetime of work regarding the better way to conduct a difficult conversation with a hostile counterpart who doesn’t want to confess.

We are in Nairobi.  Al-Owhali is suspected of participating in the bloody bombing of the local American embassy. The FBI wants to know who Al-Owhali made a telephone call to after escaping the explosion site. Here is a rough breakdown of the long scene (which is 8 minutes long):

Set up the expectation for competence
Chesney orders his colleague, a younger woman, to leave the room. She has just been too aggressive. Chesney’s voice is authoritative, slightly angry. The woman leaves.
We got message one: Chesney wants to play the good cop game alone. We also get message two: he knows what to do. So, we want to see what he has in mind. The screenwriter has just promised that we’ll see an exercise of competence. We are looking for the show to be delivered.

Focus on respect
Chesney asks the man if he had the chance to pray after he was arrested. The positive answer by the suspect makes the agent sincerely satisfied. His demeanor is calm. Not a sparkle of aggressiveness. From here on, it is as if Chesney was thinking aloud, genuinely asking the help of the detainee in order to avoid mistakes.
Humanity in the foreground. The agent knows how to establish a relationship.

A little bit of paranoia
Chesney repeats the terrorist version, asking brief questions to be sure he understood well. The man was found with 800 dollars. How is it that the blast made him lose his documents, but not the money they found him with? Ah, ok… It’s because the man kept the money in the inside pocket of his jacket, which he now shows to the interrogator. So he is still wearing the same clothes as the day of the explosion…
All the time, Chesney writes down a short note on a piece of paper. The suspect notices it. He starts wondering why.
The notes… The agent is too calm… Something doesn’t click. Yes, Chesney knows how to stir a little bit of paranoia while playing the good cop game.

Hide your game
Chesney opens his heart. So many innocent people, also Muslims, were hurt or killed by the bomb… He is shocked at the idea of innocent people suffering. The agent wonders: why? The suspect comments that only Allah knows who is innocent. Chesney has a different angle on this point: “Thank you… I also pray for this”.
The agent knows how to hide his game. He slightly provokes (the bomb killed also Muslims) but he deprives his counterpart of any reason to get angry (he thanks him, forcing a positive interpretation of an insensible answer). Chesney seems so sincere and vulnerable. The terrorist is taken back.

Hide your game further
Chesney starts recalling the time he was in the army. The friendship with his comrades. Their patriotism. The fact that they prayed together. He asks the suspect if he served too. The man nods. So he can understand…
The detainee is forced to ask himself: why is he telling me this story? I couldn’t read his game before, now it is even more illegible…
Like the man will discover very soon, Chesney is lulling him and, like a serpent, wrapping the victim into his coils.

Accomplish the flanking move
Chesney calls his bluff. In the army he learnt counter-interrogation techniques. Rule number one: stick to your cover story. Which the suspect did very well. Except for making two mistakes. First: he got blood on his hands because of the blast, but his clothes are clean, so they are not the same as the day of the explosion… “I washed them” counters the detainee, who asks: “What’s the second mistake?”. Well, the belt he is wearing is new, it has no creases… Chesney invites the man to unbuckle and take it off. Actually, there is still the price tag on it…
The agent catches the terrorist by surprise. Now the man is vulnerable, and fearful.

Throw the upper cut
Now, and only now, Chesney shouts. Vertical acceleration. He is suddenly furious. With savage rage he orders the prisoner to write down the telephone number of his accomplices.
The man obeys.
Always beware a good cop…

When Chesney exits the room he meets his colleague waiting in the corridor. She doesn’t know what’s just happened. He hands her the piece of paper with the phone number. The woman is surprised: “How did you get this?”
“I asked” is Chesney’s answer.
Subtext: competence is everything.