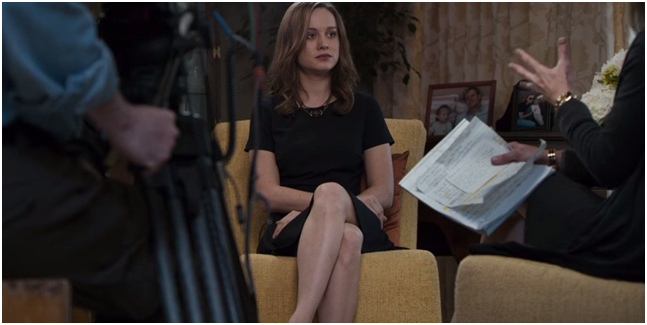 Pure drama, in stories and life, is when what one believed to be true, valuable and praiseworthy, suddenly turns out to be false, wrong and blamable. The pressure (thus, drama) is then almost unbearable. A character loses their certainties. A new direction has to be taken, but a way out seems impossible to find.

The greatest example this year is probably Room (to me, the best screenplay at the last Oscars).

It is when Ma, finally home and facing the psychological consequences of having been kidnapped, gives a TV interview.

Because of what we saw in the first part of the movie, we know how much she did to protect her son Jack while they were kept locked by her rapist, Old Nick. We saw Ma making a first, unsuccessful attempt to make Jack escape after a seven years captivity by pretending the kid was ill in order to convince Old Nick to take the boy to the hospital. When it didn’t work, she had to risk more and pretended Jack was dead. This second attempt was successful.

Once free and back to her everyday life, it becomes more and more evident that Ma has not overcome her trauma (the trauma she was so brave to handle and hide for the good of Jack while they were imprisoned).

The interview is difficult. The situation is uncomfortable. She feels the questions are intrusive and cruel.

The last question, at the end of the scene, triggers the climax. It takes the drama to the maximum level by turning upside down the point of view the character has on her terrible experience. Also the audience’s perspective is forced to shift – at least for a few seconds, we have to consider the idea that things should be seen also from a different angle: 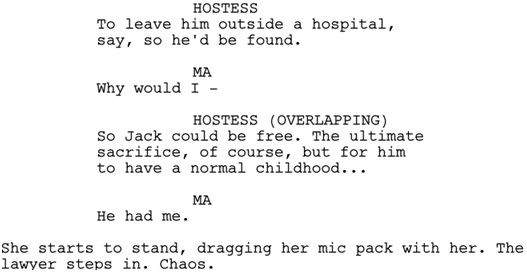 What the hostess is wondering – why Ma waited so long before making her attempts to save Jack, separating their two destinies – strikes both the character and the viewer. The idea Ma behaved selfishly suddenly grabs our attention – it seems worth considering. The woman who was the victim of a kidnapper, appears to have been – to a certain degree – herself a captor, unable to leave her son because she needed him, because she depended on him.

But this doesn’t matter much. Director Lenny Abrahmson told screenwriter Emma Donoghue not to listen to screenwriting books while adapting her novel.

It doesn’t matter where ideas for good writing come from.
It’s important that they are in the script.